Omslagtekst
When Eadlyn became the first princess of Illéa to hold her own Selection, she didn’t think she would fall in love with any of her thirty-five suitors. She spent the first few weeks of the competition counting down the days until she could send them all home. But as events at the palace force Eadlyn even further into the spotlight, she realizes that she might not be content remaining alone.

Eadlyn still isn’t sure she’ll find the fairytale ending her parents did twenty years ago. But sometimes the heart has a way of surprising you…and soon Eadlyn must make a choice that feels more impossible—and more important—than she ever imagined.

END_OF_DOCUMENT_TOKEN_TO_BE_REPLACED

Omslagtekst
Princess Eadlyn has grown up hearing endless stories about how her mother and father met. Twenty years ago, America Singer entered the Selection and won the heart of Prince Maxon—and they lived happily ever after. Eadlyn has always found their fairy-tale story romantic, but she has no interest in trying to repeat it. If it were up to her, she’d put off marriage for as long as possible.

But a princess’s life is never entirely her own, and Eadlyn can’t escape her very own Selection—no matter how fervently she protests.

Eadlyn doesn’t expect her story to end in romance. But as the competition begins, one entry may just capture Eadlyn’s heart, showing her all the possibilities that lie in front of her . . . and proving that finding her own happily ever after isn’t as impossible as she’s always thought.
END_OF_DOCUMENT_TOKEN_TO_BE_REPLACED 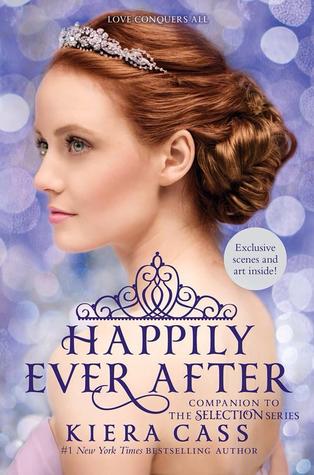 Omslagtekst:
Meet Prince Maxon before he fell in love with America, and a girl named Amberly before she became queen. See the Selection through the eyes of a guard who watched his first love drift away and a girl who fell for a boy who wasn’t the prince. This gorgeous collection features four novellas from the captivating world of Kiera Cass’s #1 New York Times bestselling Selection series—two of which appear here in print for the first time—as well as exclusive, never-before-seen bonus content.
END_OF_DOCUMENT_TOKEN_TO_BE_REPLACED

Omslagtekst:
The time has come for one winner to be crowned.

When she was chosen to compete in the Selection, America never dreamed she would find herself anywhere close to the crown—or to Prince Maxon’s heart. But as the end of the competition approaches, and the threats outside the palace walls grow more vicious, America realizes just how much she stands to lose—and how hard she’ll have to fight for the future she wants.
END_OF_DOCUMENT_TOKEN_TO_BE_REPLACED

Omslagtekst:
The Selection began with thirty-five girls.
Now with the group narrowed down to the six Elite, the competition to win Prince Maxon’s heart is fiercer than ever—and America is still struggling to decide where her heart truly lies. Is it with Maxon, who could make her life a fairy tale? Or with her first love, Aspen?

America is desperate for more time. But the rest of the Elite know exactly what they want—and America’s chance to choose is about to slip away.

END_OF_DOCUMENT_TOKEN_TO_BE_REPLACED

Achterkanttekst
For thirty-five girls, the Selection is the chance of a lifetime. The opportunity to escape the life laid out for them since birth. To be swept up in a world of glittering gowns and priceless jewels. To live in a palace and compete for the heart of gorgeous Prince Maxon. But for America Singer, being Selected is a nightmare. It means turning her back on her secret love with Aspen, who is a caste below her. Leaving her home to enter a fierce competition for a crown she doesn’t want. Living in a palace that is constantly threatened by violent rebel attacks. Then America meets Prince Maxon. Gradually, she starts to question all the plans she’s made for herself—and realizes that the life she’s always dreamed of may not compare to a future she never imagined.
END_OF_DOCUMENT_TOKEN_TO_BE_REPLACED