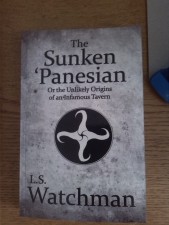 Achterkanttekst:
The Swifttide Fleet is the least impressive of the four factions that rule the city of Narapan, a nest of pirates, cutthroats and thugs. For years, the competing fleets, stronger  one and all, have been driving the Swifttide Fleet closer to the wall. Their numbers, funds, and territory shrink by the day, and unless they act soon, the Fleet might well collapse.
Gerris, third in command on the flagship, is a simple man. He’s been indebted to the Fleet for years beyond count, and has spent the majority of his life in service of the Fleet. When the Fleet’s last chance at survival is revealed, Gerris has no choice but to pack up his scant possessions, and line up at the docks.
END_OF_DOCUMENT_TOKEN_TO_BE_REPLACED