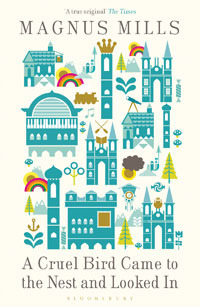 Omslagtekst
Far away, in the ancient empire of Greater Fallowfields, things are falling apart. The imperial orchestra is presided over by a conductor who has never played a note, the clocks are changed constantly to ensure that the sun always sets at five o’ clock, and the Astronomer Royal is only able to use the observatory telescope when he can find a sixpence to put in its slot. But while the kingdom drifts, awaiting the return of the young emperor, who has gone abroad and communicates only by penny post, a sinister and unfamiliar enemy is getting closer and closer…A Cruel Bird Came to the Nest and Looked In is Magnus Mills’s most ambitious work to date. A surreal portrait of a world that, although strange and distant, contains rather too many similarities to our own for the alien not to become brilliantly familiar and disturbingly close to home. It is comic writing at its best – and it is Magnus Mills’s most ambitious, enjoyable and rewarding novel to date.
END_OF_DOCUMENT_TOKEN_TO_BE_REPLACED